*this post may contain affiliate links. They don't cost you a penny, but pay a commission to this site - LEARN MORE 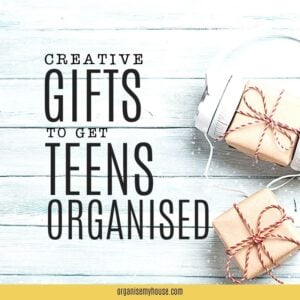 Creative Gifts To Get Teens Organised (Without Them Even Realising!)

The Best Way To Clean A Room – Easy 13 Step Guide 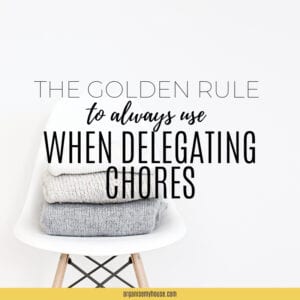 The Golden Rule To Always Use When Delegating Chores 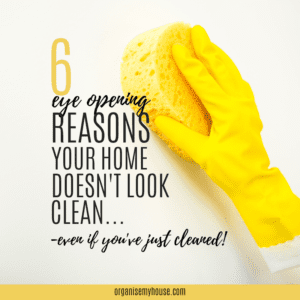 6 Eye Opening Reasons Your Home Doesn’t Look Clean
Share with a friend! 0
Pin & SAVE FOR LATER 0

A cluttered room can be a major source of stress for both parents and kids of all ages. Not only is it difficult to find anything in a messy room, but it can also be tough to relax in a chaotic environment. If their room is constantly cluttered, follow these simple tips to get kids to keep their room tidy – finally!

Most parents are constantly asking “Why is my child’s room always messy?” or “Why can’t my kid keep their room clean?” – and it’s a real frustration.

Part of you wants to let them get to the point where they want to keep it tidy themselves, but the other part is wanting to get in there and just get it done.

Above all – it’s important to allow them to be an active part of the solution. Whatever their age.

Yes, teenagers will want much more independence in their space, but even younger kids will appreciate you giving them a say in what happens to it.

Also, you won’t teach them those valuable life skills that they’ll need when they move out of home if you do it for them all the time.

You need to get the balance right between letting them do it themselves, and giving them a helping hand (whether they realise you’re doing that or not!).

At first you’ll probably be doing the majority of the work, and over time you’ll do less and less until it’s all them. It’s worth it though!

Sound good? well, here are some tips to allow you to get the results you want, without any of the hassle you don’t…

Helpful Tips For Getting Kids To Tidy Their Rooms

#1 – Lead by example around the rest of the house

Just as you can lead by example for a partner who doesn’t want to get on board with your decluttering / organising efforts – so too can you do this with your children.

Kids are always looking and learning – and when you make the rest of the house clutter free and tidy and they see the benefits of this, they may just want that for themselves.

For example – you can literally tell them that you have time one day to take them somewhere because the house is already tidy.

This is a good first step, as it leads them into the idea of tidying up slowly, rather than trying to get them to change their habits overnight.

TIP – It’s also important to talk about what mess is OK – so they don’t go too far the other way and become very picky with how things need to look at all times. Living in their rooms WILL create some mess – it’s just how to keep on top of things that matters (just like with the rest of the house)

#2 – Show them what you expect from them.

What’s ‘tidy’ to you may not be the same for them, so you really do need to be specific as to what you want them to do.

Maybe help them for a while so they get the idea.

Also – what you may see as easy skills are things that they may not understand.

My daughter is a prime example of this.

She wanted to tidy up and wanted me to leave her to it. An hour passed and I went to check in on her, only to find her in the middle of more mess than she started with. After chatting, I realised that although the will was there, she didn’t have the skills needed to do it.

She learned that she DID need my help for the first couple of tries – and now she’s great at doing it by herself.

TIP – Put a checklist in each childs room so they know what they need to do and in what order. Breakdown the room into smaller areas that they can work their way through (maybe doing a specific space each day of the week). This can give them the right amount of independence and stop you having to nag them every day.

#3 – Have a place for everything

If their room is full of ‘stuff’ with no home, it’s going to be more difficult for them to keep tidy.

Help them work out what they need first, and then give each item a specific home in their room.

As such – your first step could well be decluttering. That way you’ll only be working with what they really DO need going forward, which will make the whole process much easier.

When it comes to giving things a specific place – why not label those areas for them? Add a quick tag on baskets, drawers etc… and they’ll be able to see clearly where everything should be put.

#4 – Make sure they have enough storage

If you don’t have enough storage, it can be really tough (if not impossible) to keep on top of the mess.

Some ideas, even for small bedrooms, are:

Another option is to allow some storage elsewhere in the house.

For example – my daughter doesn’t have a wardrobe in her room as it wouldn’t fit easily, so she has the one in the guest bedroom. We don’t need that specifically, so it makes sense to give it to her and free up a little space in her room.

Make it work for them, depending on their age, physical capabilities, and preferences.

Some examples would be:

Just as I always recommend a tidy up time each day (we all need it!), get the children to focus on their rooms while you do the rest of the house (all those smaller tasks like fluffing cushions, wiping surfaces, folding laundry etc…).

Making it a specific time each day gives it consistency, and means it will become habit – plus you’re showing them that you’re doing it as well so it’s not just them.

Related: 11 Guilt Free Ways To Get Kids To Do Chores At Home – Yes, Really!

#7 – Celebrate When They Do Tidy Up

We are too quick to tell them off for not keeping a tidy room, so it makes sense to be positive as well to reinforce that it’s a good thing to do.

Maybe you could give a reward every so often for keeping things tidy – so they see the benefits and relate it to something nice.

What Should You Do If They Still Refuse To Tidy Up?

Unfortunately kids may well not mind living with the mess for much longer than you want them to, so these tips may still backfire (at least for the short term while they get used to things).

As long as you’ve looked at all the things above (so there’s enough space for them to keep things tidy, the storage is easy to use etc…) you may have to try a different method…

The first way to go would be to start with one thing and grow from there.

When you’re trying to get them to tidy everything in their room it can feel really overwhelming – so what about focusing just on clothes, or books, or whatever you feel would make the most difference initially.

You can then add in another category as they get used to things – and you may be surprised at how quickly this makes all the difference.

Each chore is independant of each other, and knowing this may help them to make the task feel less overwhelming or time consuming.

Yes, you’ll want to work towards them cleaning their rooms as well, but the first step (and one that will make cleaning much easier too) is to tidy up.

Just as you’re going to reward them for tidying their room, so too should there be a consequence for NOT tidying it.

Some ideas would be:

So there are the tips for getting kids to keep their rooms mess free (and what to do if they don’t!)

Yes, it’s pretty hard to get any child to keep their messy room tidy, but with a bit of effort and creativity you can make it work.

Try using some of the tips we’ve provided, based on their age, such as making storage easy to use or having a tidy up time each day.

If that doesn’t work, consider introducing consequences for not keeping things tidy.

Lastly, remember to celebrate when they do manage to keep their bedroom tidy!

However long it takes, it’s worth the effort – promise!

Liked this article? Try These Next...

Is My House Clean Enough? Give Yourself A Break!

Is My House Clean Enough? Give Yourself A Break!

How To Create The Perfect Laundry Schedule [One That Works]

How To Create The Perfect Laundry Schedule [One That Works]
SHOP ALL PLANNERS & COURSES NOW
This website uses cookies to improve your experience & to help understand how you use the site.
ACCEPT & CLOSE Find out more..Settings
Cookies Policy