Written By Chrissy & Filed Under: Hallway, Home Decor
This post may contain affiliate links** which won’t change your price but will share some commission.Learn More

Decorating a narrow hallway can be such a pain – can’t it!

What do you use to accessorise or add interest/character?

Struggles with spaces are quite common when it comes to making decisions about decorating, so I thought I’d share with you today some of the thinking and ideas I had for that space in my own home in the hope that it may well help and inspire you when you do any redecorating of your own.

So, let’s start at the beginning – shall we…. 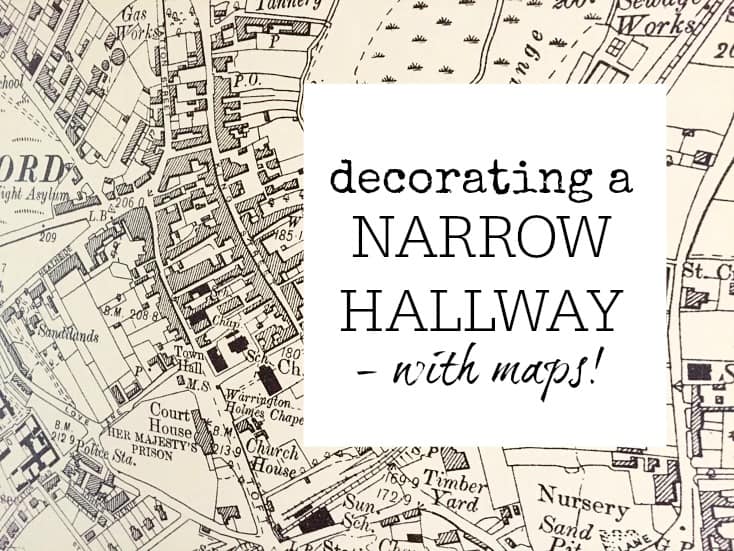 I love anything about decorating – from picking colours to choosing the finishing touches. But sometimes there can be a tricky area that takes more thought than most. We all have spaces that are difficult to find a solution for, and mine is (was!) a narrow hallway at the top of the stairs.

Let me introduce you (and please excuse the laundry basket!)…. 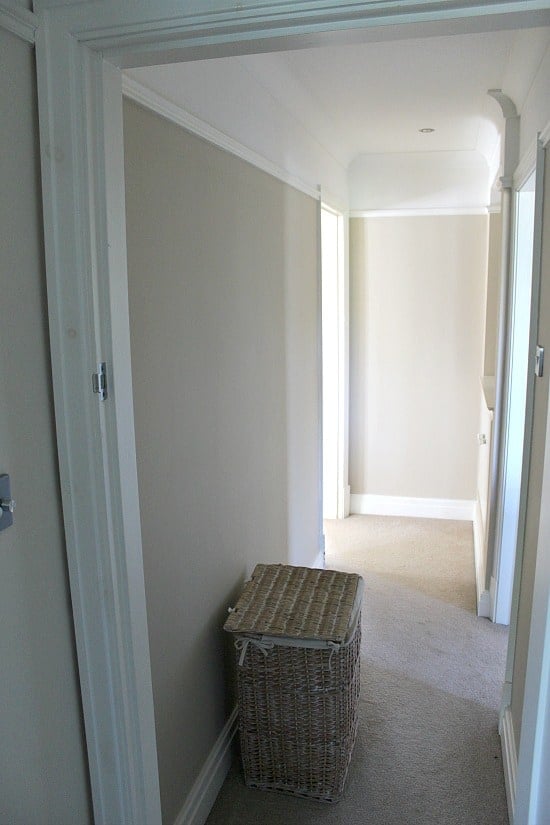 This hallway came from carving out some space from an existing bedroom when we extended the house about 6 years ago – and I have to say that I was really pleased with how it came out. You see, we live in a 1930’s style house that has deep skirting and picture rails – so the builder we had made sure that every part of the extension used the same details – and now it feels seamless rather than an addition.

TIP – Always try and match finishes and fittings to the existing home when it comes to extending – so you don’t know where the new begins!

There was nothing fundamentally wrong with this space – it’s clean, light and fresh – but it really is lacking any kind of finishing touches – and with me being me, that had to change!

Trouble is – it’s a difficult space to add anything to.

First things first – when it comes to decorating – and that’s to work out what the issues are in the space (because the last thing you want is to decorate beautifully only to find it still doesn’t work because you haven’t addressed what’s wrong).

This hallway area is narrow – which brings with it the issue of how to decorate the walls to add interest and some sort of focal point without it feeling too busy or impractical.

We needed to be able to do all of the following: –

Now that we had worked out the issue (which was probably why it had taken so long to get around to tackling that space), it was time to look at ideas that may or may not work.

There are lots of options I looked at and here’s the list – with my thinking behind each one: –

So – from all this investigation, I knew I wanted something similar to wallpaper but more quirky. Something that filled the wall and that didn’t need anything extra in terms of furniture or accessories to feel complete.

What options are there?

Well, murals came to mind immediately, and wall stickers as well, but nothing really made sense to the rest of the house.

Until, that is, I realised that the answer had literally been staring me in the face all along…

It’s so true that you can get inspiration from any number of places and you should always be on the look out, but I wasn’t expecting to find it at my gym!

I go the my gym quite a bit – I even work there at least one day a week – and in their work area they have a wall with a feature wallpaper/mural on it.

The thing that makes it quirky is that it’s a map wallpaper of the local area.

Something that’s interesting to look at, and looks great at the same time. It also works really well with the look I have in my house of a little bit of an industrial theme going on. 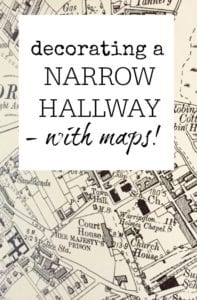 Pages: Page 1 Page 2
Previous Post: « WHY FRIDAY IS THE NEW SUNDAY WHEN IT COMES TO PREPARING FOR SCHOOL!
Next Post: 8 REASONS FOR MOVING HOUSE – AND WHY YOU MAY WANT TO RECONSIDER… »

Please log in again. The login page will open in a new tab. After logging in you can close it and return to this page.

This website uses cookies to improve your user experience. They enable us to understand clearly how you use the site & track how you are using our website (what you have signed up for, for example). As a result, this helps us to develop and improve our website as well as products and/or services in response to what you might need or want.
ACCEPT & CLOSE Find out more..Settings
Cookies Policy
Necessary Always Enabled