Before and After – How I organised my food cupboard

Food storage – we all buy food regularly, and its needs to be stored so we can access it easily, so that we know what we have, and so that nothing (or very little) gets wasted.

Like many people, I had let my food cupboard (larder) go a little…..

We knew where everything was, but it was becoming increasingly difficult to get to everything, and know what we had.

I wanted to create a streamlined space that was a pleasure to use, and heres what I did – hope some of the ideas help you too!

My larder before organising

I have a large larder type cupboard in my kitchen, and when we installed the kitchen this was the aim – so that we could open it up and see everything we had clearly.

I use this for all the foods that we use that aren’t for the fridge or freezer. The only things I don’t have in this space are baking ingredients and herbs and spices – and I will talk about these another day.

(Basically, I don’t have those in the space as it makes more sense to split them up – the herbs actually are nearer the cooker so we can grab when we are cooking, and the baking products are further away as these get used once a week usually).

The larder is for the foods that we use daily, and want to be able to see easily.

Whatever your food storage is (2 or 3 smaller cupboards, a larger walk in larder etc… ) you can take away some of these ideas I’m sure!

Right, so we have a picture to the left here – let me take you through it:-

1. The top shelf was used for items that we don’t use often (as its too high to keep reaching into, and could be unsafe to have tins in it as they could easily fall on heads). It was therefore used for snacks and treats – as these can be bulky and also were way out of the way for my little girl to grab ;o). However, it was still messy to keep trying to get what we needed, and things kept falling down the back which were forgotten about.

2. All canned goods. This is eye level and therefore its easier to see and grab what we wanted. Again though the shelf is deep and things could easily be lost at the back.

3. Kind of a miscellaneous shelf. It has packets of food (lentils, meals such as tacos, a few cans at the back that were spilling over from the shelf above, and a large jar of raisins at the front (my daughter has raisins on her cereal so this was a handy place to put them).

4. Cereals and breakfast items – easy to reach for my daughter, and the right height for cereal boxes so worked pretty well – however it still could have worked harder and got more in it.

5. A narrower space that worked for pasta, rice, noodles etc….

6. A very tall area that had bottled water, juices and the odd larger cereal box stored in it. This worked OK as the bottles were handy, but there was wasted space as the area was taller than the bottles.

The main areas I wanted to improve were as follows:-

My larder after organising 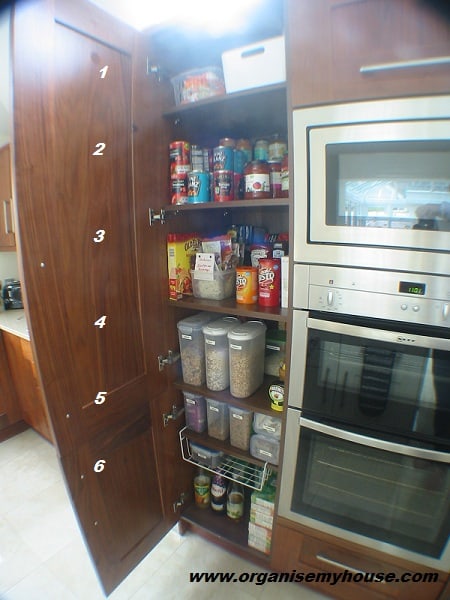 I am really happy with the results – so let me take you through them:-

In the main everything has stayed where it was – as the overall layout worked. Items were housed at the right level dependant on usage and who needed access to them, and the space was pretty much OK for what was being stored.

But the real difference now is that its so much easier to see everything as soon as you open the door.  There are layers within each shelf area so the vertical wasted space has been tackled, and everything’s clearly labelled.

Shelf by shelf, heres what I did:-

1. The top shelf was made much simpler by adding in two large tubs that were a good fit so that not much space was wasted. They are easy to pull out and grab what we need- and also hide away all those treats so that they aren’t as tempting!

2 and 3. I added a shelf tidy to the back of each of these areas so that I could place different products at the back but still see and access them easily. This meant that I could use the front sections for different items that are used more often – and store everything of one type together.

4. I added cereal storage containers to the front of the area, with our favourites in there – and decanted each box into them. Then any that was left was put behind it – ready to fill when needed. Also at the back I keep some long life milk for emergencies, and some of the less frequently used cereals. I labelled all the containers so you can see at a glance what you need. Lastly I added all jars of things to put on toast (marmite, jams, peanut butter etc…) on the right – all things we mostly use at breakfast.

5. I found some plastic containers** that fit the height of this space really well, and were rectangular and therefore filled the space better – and added one for each type of pasta, rice and noodles that we use – the containers roughly house a full bag of each so they were easy to decant (and any extra packs are placed at the back ready to fill the containers again). I also used long containers** for spaghetti and tagliatelle and put those on their side so they fit into the right hand side of the space.  All containers were again labelled so its easy to find what you want.

6. I kept this much the same, as the bottles worked well. However, the main change here was that I added in an extra shelf **.  You can see that its wire, and hangs on the shelf above. This works perfectly for housing other products (we now have the raisins there in a plastic box so that my daughter can reach them!).

Its a work in progress (as all organising tasks are) – and it may well be updated as we use it and find what works and doesn’t – but given what we wanted to tackle as the problem areas, its fixed all of those. 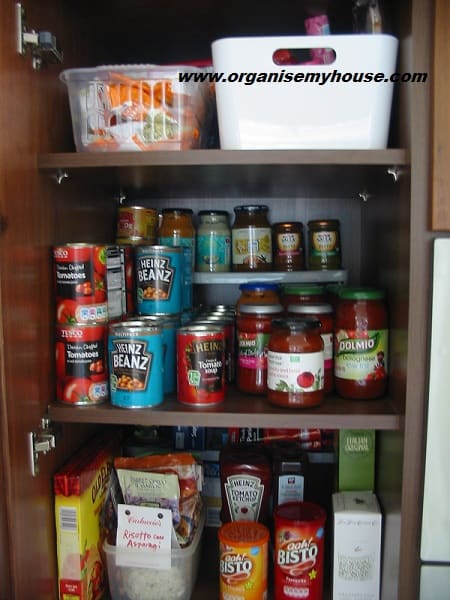 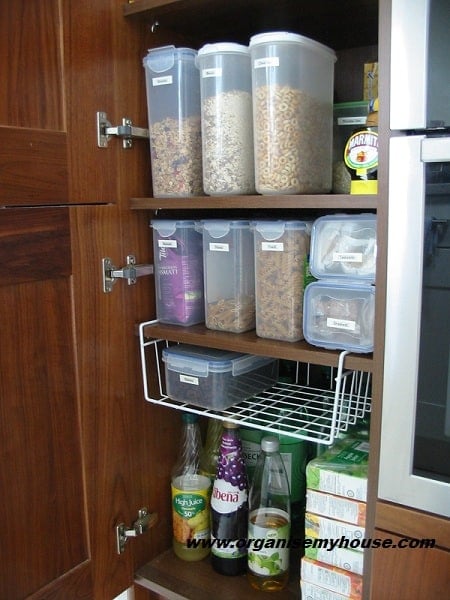